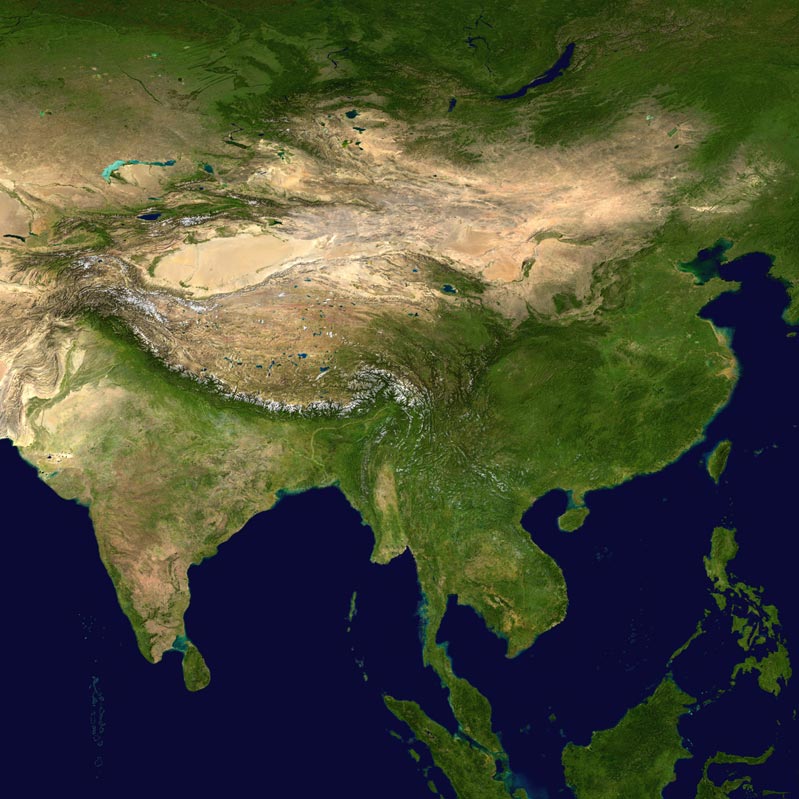 Like Mesopotamia, the Nile Valley, the Indus Valley, Mesoamerica, and Andean America, China is one of the early centers of state development. The team of Chen Xingcan of the Institute of Archaeology in Beijing, Li Liu of Stanford University in Melbourne, Australia, and Yunkuen Lee of Harvard University negotiated a permit for a project in the eastern hinterlands of Erlitou, a capital that emerged about 1800 BC. Their program had many facets. Henry Wright's has contributed to the project by assisting with the survey component of the work.

The survey and sampling program has documented centers, villages, and hamlets dating from the Peiligang Period about 6000 BC until the second or third generation Zhou states up to about 600 BC. Analysis necessary for the first monograph is nearly complete.

Late Prehistoric and Early Historic Landscapes of the Tungabhadra Corridor

The primary focus of Carla Sinopoli's research is in southern India, where she is currently co-directing the "Late Prehistoric and Early Historic Landscapes of the Tungabhadra Corridor" project (LP/EHLTC) project in collaboration with Kathleen Morrison (University of Chicago) and R. Gopal (Karnataka Directorate of Archaeology and Museums). The project explores social and political transformations during a 1500-year time span that witnessed the emergence and consolidation of social and economic inequalities and the creation of territorial polities. Work focuses on a c. 40-square-kilometer area along the Tungabhadra River in the semi-arid uplands of northern Karnataka. Within this area, Sinopoli and her colleagues have identified more than two dozen archaeological sites—including settlements, rock art sites, megalithic mortuary complexes and diverse agricultural features—that span from the second millennium BCE Neolithic period through the succeeding Iron Age and Early Historic phases of the first millennium BCE and first millennium CE, respectively. Field and laboratory seasons in 2003, 2005, 2006, 2009, and 2010 have been supported by the National Geographic Society, National Science Foundation, and Wenner-Gren Foundation for Anthropological Research.

Fieldwork has focused mainly on the largest settlement in the region, Kadebakele, which encompasses the entire sequence and extends over more than 60 hectares. Detailed stratigraphic excavations have documented domestic and ritual architecture and deposits, and vast assemblages of artifacts (ceramics, iron objects, ornaments, etc.), botanical data, and faunal remains, which are informing on changing technologies, consumption and production practices, social status, and regional and long-distance interactions.

Carla Sinopoli began working in South India in the early 1980s at the 14th- through 16th-century imperial city of Vijayanagara, capital of South India's largest historic empire. From 1988 through 1997, she co-directed the Vijayanagara Metropolitan Survey project, a systematic regional survey of the c. 450-square-kilometer fortified hinterland of Vijayanagara. The project documented more than 700 archaeological sites (site distribution, left), including several of the prehistoric and early historic sites that are the focus of her current LP/EHLTC project. The vast majority date to the Vijayanagara period and include: settlements, fortifications, temples, shrines and sacred images, agricultural features, and craft production sites among others (aqueduct, right). Although the Vijayanagara fieldwork has long since ended, Sinopoli continues to research and publish on Vijayanagara, and is currently working with her collaborator Kathleen Morrison to complete the second survey monograph.

Fordings and Frontiers: Architecture and Identity in the Central Himalayas

Nachiket Chanchani has been investigating the architectural-archaeological evidence in the Central Himalayas, a region culturally and geographically defined by the glacial sources and the upper reaches of the Ganga River and its important tributaries. Scattered on mountain tops and valley bottoms in this region are hundreds of stone masonry temples, ancillary structures, water-shrines, commemorative markers, and loose sculptures. The vast majority of these edifices and steeles, which date from the sixth to the fourteenth-century CE, have never been published.

Nachiket has been carefully documenting and interpreting the architectural-archaeological evidence and melding it with the inscriptional record to advance our understanding of issues as varied as the transmission of forms, their uses for ethnic and dynastic self definition and projection, the nature and structure of artisan lineages, the formation of trade routes, the expansion of sacred geographies, and the persistence and mutation of local memories.

Nachiket's research has been supported by the Ashkara Foundation (India), the Asian Cultural Council (New York) and other organizations. His preliminary findings are appearing in such peer-reviewed journals as Arts Asiatiques, Archives of Asian Art, and Ars Orientalis. Nachiket is currently working on a book-length study on the subject.