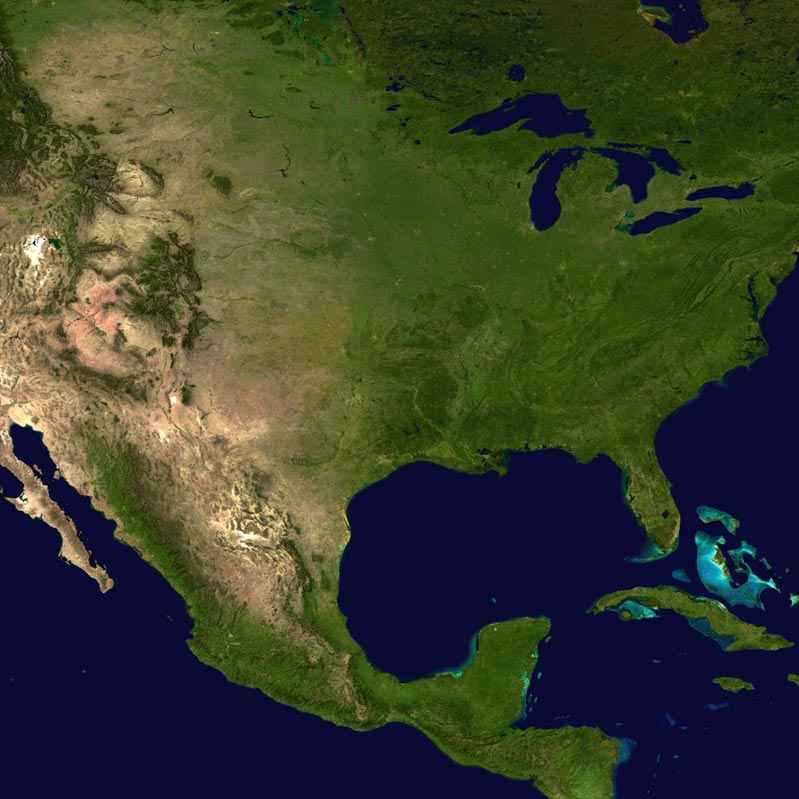 Ancient hunters on the Alpena-Amberley Ridge

John O'Shea's research in central Lake Huron is concerned with the potential human occupation of the Alpena-Amberley Ridge. This feature, on older nautical charts labeled as Six Fathom Shoal, is an outcrop of limestone and dolomite which, during the period 9800 to 7000 years ago, formed a dry land corridor which divided the modern Lake Huron basin into two distinct lakes, and which linked northeast lower Michigan with southwest Ontario. It is hypothesized that during this period of low lake levels the ridge would have provided a natural migration route of caribou which would have in turn been exploited by ancient hunters.

Initial research on the Alpena-Amberley Ridge using sidescan sonar and a small remote operated vehicle (ROV) has demonstrated the existence of stone arrangements that are consistent in size and placement with drive lanes used in the Arctic for caribou hunting. Current efforts are divided between the discovery and documentation of additional structures, and the direct examination of identified features by scuba trained archaeologists in order to recover cultural and environmental materials dating to this important time period in Great Lakes history. Research on the Alpena-Amberley Ridge has brought together a diverse interdisciplinary team of archaeologists, environmental scientists, engineers, and computer scientists who are involved in modeling the ancient environment.

Joyce Marcus is working on the rise and fall of ancient Maya dynasties, paying special attention to the politically powerful dynasty at Calakmul in Campeche, Mexico. Her ongoing work is in collaboration with Dr. William J. Folan, Centro de Investigaciones Históricas y Sociales, Universidad Autónoma de Campeche, Mexico. Together, they have focused on the polity and the city, publishing articles on the settlement pattern, roads, buildings, tombs, temples, palaces, and hieroglyphic texts.

As a result of ongoing work, they know Calakmul's domain was on a political par with Tikal's and that the two capitals were rivals, on and off, from AD 500–900. They have learned that noble Calakmul women were married to lords in other cities, sent out to forge political ties. The kingdom of Calakmul, once thought to be a lesser polity, has turned out to be the largest with the most far-flung allies. The founding of the Calakmul dynasty as well as its growth and collapse are ongoing projects.

Since 2001, Rob Beck has co-directed the Exploring Joara Project, which focuses on the archaeology and early colonial history of Native American societies in the North Carolina Piedmont. Rob and his colleagues have directed NSF-supported research along the Catawba River at the Berry site, location of the native town of Joara and the Spanish garrison Fort San Juan, built by the Juan Pardo expedition in 1567. Manned by thirty soldiers for eighteen months, this fort is the earliest European settlement in the interior of what is now the United States. Its excavation is shedding new light on the process and practice of colonialism near the very beginning of the colonial era.

HUROP combines Lisa Young's long-term archaeological research interests in the ancient farming communities of the Homol'ovi area of northeastern Arizona with undergraduate education and collaborative public outreach. With funding from the National Science Foundation's Research Experiences for Undergraduates (REU) program and the University of Michigan, college students from all over the country participated in the fieldwork and then shared what they learned with the public during the summers of 2006, 2007, and 2008. Excavations focused on two archaeological sites within the Homol'ovi Ruins State Park: AZ J:14:36, a pithouse village next to the Park's visitors center, and Creswell Pueblo, an Archaeological Conservancy site. The HUROP website contains weekly journal entries from excavations conducted during the 2007 and 2008 field season.

In the Southwest, archaeologists have interpreted the change from pithouses to pueblos as a fundamental change in the organization of communities. Pithouses were built by digging into the ground to make the walls and floors. Pueblos were built above ground and have connecting walls.

The Homol'ovi area is unusual because pithouses were the preferred form of house until the early 1200s. In other areas of the northern Southwest, pueblos became the dominant type of house by around 1000 A.D. Homol'ovi pithouse may have also been used at the same time that the first pueblo was built in the area. As a result, the Homol'ovi area offers the opportunity to test archaeologists' ideas about the organization of pithouse and pueblo communities at roughly contemporaneous sites, rather than sequentially occupied sites — the approach taken by most other analyses.